Warning: "continue" targeting switch is equivalent to "break". Did you mean to use "continue 2"? in /homepages/45/d285268989/htdocs/mummymcauliffe.com/wp-content/plugins/gravityforms/common.php on line 4815
 The TOMY TF550 Digital Baby Monitor up for review | mummymcauliffe
Previous Post

The TOMY TF550 Digital Baby Monitor up for review

Selecting a baby monitor can be such a difficult decision for first time parents. We agonised over which model to get before Little I was born, reading hundreds of reviews online and asking friends what they had. When it comes to baby safety, I’m sure most parents would be willing to pay a premium for a gadget which is going to put their minds at rest. But which features are really essential in a baby monitor, and which bells and whistles can you do without?

What I instantly loved about this monitor is that it truly is ‘plug n play’. I hadn’t been very organised about getting the monitor set-up before we needed it, and so when Wolfy decided he was ready for a bedtime routine, at a much earlier stage than his sister had been, it totally took us by surprise. I rushed to unpack the new TOMY monitor, fully expecting it to be an hour’s worth of reading instructions and fiddling about; but within a couple of minutes I had it all up and running! I was pleasantly surprised. Not a single swear word had been uttered, and I was able to put my feet up for the first time since he’d been born!

The TF550 has an extra-large backlit LCD screen on the parent unit which displays the time and temperature within the baby’s room. At this time of the year I’m finding the temperature reading to be particularly useful. 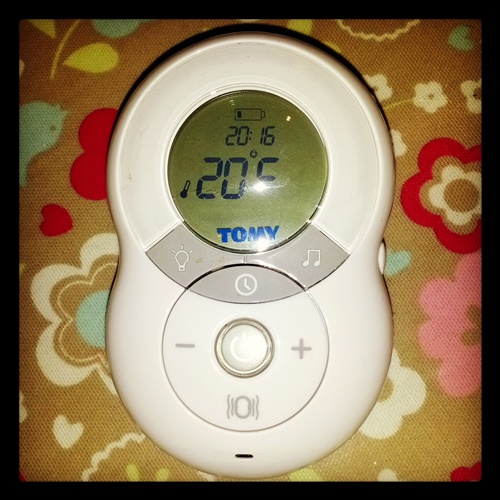 One of my favourite features of the monitor is its night light, which can be switched on and off remotely from the parent unit so that you don’t need to enter the baby’s room and disturb them. The brightness of the light can also be easily adjusted, and it can be used independently as a night light once you no longer need the monitor.  The monitor also plays soft soothing lullabies, which I admit we haven’t really needed yet, but I’m sure it’s only a matter of time before we do.

The sound quality is probably the most important feature when it comes to selecting a baby monitor. Ultimately, you want to trust that you will hear your baby if they need you. Like many monitors on the market, the TOMY TF550 allows you to select the volume setting that you require, and over several weeks of testing we’ve found the sound quality to be very clear. There is also a vibrate setting for parents who wish to be further alerted to louder cries, or a mute setting which will only allow you to hear cries over a certain threshold (probably for when they’re a little older).

There is only one design flaw with the TOMY TF550 which we’ve detected, and that’s the location of the talkback button. It’s right in the spot where you would naturally place your hand around the parent unit to pick it up, and so both my husband and I keep accidentally pressing it. On a couple of occasions it’s ended up disturbing the baby. It really would be better placed on the front of the unit, where you’d be less likely to knock it. Having the talkback functionality is really useful though, particularly as the child gets older. We still use it with our four-year-old daughter now when she wakes too early!

Overall, the TOMY TF550 is a very user-friendly baby monitor, with all of the features that you really need and will find useful. I love the simple design and the easy-to-read display.  At £69.99 it seems sensibly priced, and is a monitor which I would definitely recommend.

Disclaimer: For the purpose of this review I was very kindly sent the TOMY monitor. All opinions stated here are of course my own.