Warning: "continue" targeting switch is equivalent to "break". Did you mean to use "continue 2"? in /homepages/45/d285268989/htdocs/mummymcauliffe.com/wp-content/plugins/gravityforms/common.php on line 4815
 Sofia the First: Once Upon a Princess...the premiere | mummymcauliffe
Previous Post 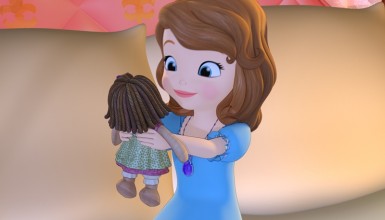 Sofia the First: Once Upon a Princess…the premiere

I hinted here, back in July, that at the start of next year we would be graced with the arrival of a new Disney Princess!

For more than 70 years, most little girls have grown up with dreams of Cinderella and Sleeping Beauty in their heads…but never before has there been a little girl princess. It seems a bit silly really, as what better way for a young girl to be able to relate to a princess than through one who’s close to her own age, facing similar worries and questions about life.

Sofia the First: Once Upon a Princess is premiering in the UK on Friday 7 December at 5:30pm on the Disney Junior channel. This is a music-filled, animated movie for the whole family, which introduces us to the new Disney princess and the story of how she becomes a princess, just before the TV series launches in early 2013.

We were sent an advance copy of the movie for review purposes, and it’s been an instant hit in this household. For the first viewing Little I picked out one of her Halloween goodies to enjoy during the movie, and astonishingly it was still intact 50 minutes later when the film had ended. This is totally unprecedented. My daughter’s reputation for her enjoyment of food (particularly of the sweet variety) often precedes her!

Within the movie, we see Sofia, a regular little girl, begin her life as princess after her mother marries the king. She is whisked off to live in the palace, with her new step-siblings James and Amber. Towards the start we see her enter her new princess bedroom for the first time, which is very pink and the stuff that most little girls dream of, complete with a walk-in closet filled to the brim with ball gowns. Little I’s eyes were like saucers at this point, but she quickly brought things back down to earth with the comment: “I hope there’s pants in there too!”

No princess movie can be complete without a ball, but this one doesn’t go exactly to plan. We see the struggles that Sofia goes through as she attempts to ‘fit in’, and this is hampered further by tensions with her new siblings.

If my daughter is representative of other young girls, she is obsessed with anything to do with school. So it’s therefore fitting that Sofia must begin a new school as part of her new life, but she doesn’t go to any regular school…she goes to princess school, otherwise known as Royal Prep! And as if that’s not exciting enough, she gets to travel to school in a flying unicorn-drawn carriage! Of course Little I now wants to go to princess school, instead of the school that we’ve recently completed her admissions application for!

But we were both in agreement that the best part of the movie is the music. There are some lovely, memorable songs within it which neither of us can seem to stop singing. It’s a lovely touch that at the end, during the closing credits, you get to see the girl who sings the songs. Little I has asked me to rewind that bit again and again – I think she has a little bit of a girl crush on her.

I don’t want to give away any more spoilers, but I hope I’ve persuaded you to tune in at 5:30pm on Friday. This is a movie you won’t want to miss! Please let us know what you think.