Warning: "continue" targeting switch is equivalent to "break". Did you mean to use "continue 2"? in /homepages/45/d285268989/htdocs/mummymcauliffe.com/wp-content/plugins/gravityforms/common.php on line 4815
 Game review: Where’s my Cupcake? | mummymcauliffe
Previous Post 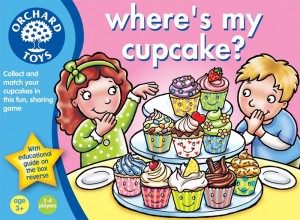 As a child, I often used to play a game with my Mum before bedtime. In addition to the usual bedtime routine, I’m also now finding it’s a lovely way for me and Little I to end the day, particularly on days when I’ve been working and not had an awful lot of time with her.

My daughter has just turned three, and she’s now old enough to grasp simple game rules and play along properly (most of the time!). There’s sometimes a bit of cheating going on, but what I particularly love about the new game ‘Where’s my Cupcake?’ from Orchard Toys, is that it encourages good manners and ultimately good game play.

The game premise, in a nutshell, is to see how many pairs of cupcakes you can match and collect. The winner is the person with the biggest pile of cupcakes at the end. But a really nice added touch within the game mechanic is that when you aren’t able to make a pair, you are encouraged to offer your cupcake to the other players so that they can, and they must then say “yes please” and “thank you” if they are going to accept.

For months we have been battling with “please” and “thank you” with Little I, but I can honestly say that suddenly the message seems to have sunk in. I’m not sure if it’s coincidence, but we’ve been playing an awful lot of this game so I wonder if it really has had some positive effect?

In addition to the intended game play, Little I has also devised a myriad of uses for the cardboard cupcakes. She’s found them great for role-playing birthday parties, shopping, cooking, and her little girlfriends have been equally drawn to the colourful cards. I forever seem to be collecting the cards up from around the house and putting them back in the box!

The game is hot off the games press, and is retailing at £7.50. It is suitable for children aged 3+. I genuinely feel it would make a wonderful birthday present for a special friend.