Warning: "continue" targeting switch is equivalent to "break". Did you mean to use "continue 2"? in /homepages/45/d285268989/htdocs/mummymcauliffe.com/wp-content/plugins/gravityforms/common.php on line 4815
 Game review: Monster Catcher | mummymcauliffe
Previous Post 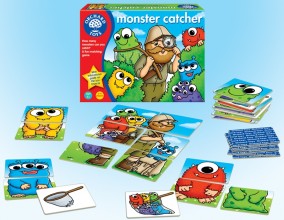 We’ve very recently entered the ‘monster’ stage at home. Little I has invented an alter ego for herself called “Smookie Bear”. She’ll go behind one of the chairs in our lounge to get into character, and emerges with zombie-like, rolling eyes, as she scuttles across the room on her tip toes to attack. Smookie Bear also has its own distinct way of talking, and likes to say in a very drawn-out voice, “I’m excellent”!

So let’s face it, a game involving monsters is always going to be a hit with preschoolers, and Orchard Toys’ new ‘Monster Catcher’ game gets a big thumbs-up from us.

What I love about the game is that there are three dimensions to it, which keeps me just as entertained as Little I. The main game mechanic is to collect as many complete monsters as possible, which come in fun different colours and designs (nothing too scary!). But additionally, there are red herring cards within the pack which may force you to give up some of your complete monsters to the ‘monster catcher’, or free all of the monsters that the monster catcher has caught. Thirdly, there is a six-piece monster catcher puzzle to complete while the game is progressing, and once the scene is complete, the game ends. So some games can last a while, while others can be over in a couple of minutes. It adds a nice level of unpredictability to the game.

We have played the game non-stop since it was sent to us a couple of weeks ago, and it never seems to get boring.

In terms of educational value, the game is great at developing matching and counting skills, and is brilliant for encouraging a child to follow instructions and take their turn. I had suspected Little I might get a bit upset when the monster catcher takes her monsters away from her, but she gets so much into the game strategy that she doesn’t seem to mind at all.

The game is retailing at £7.50 and is recommended for children aged 3+.