Warning: "continue" targeting switch is equivalent to "break". Did you mean to use "continue 2"? in /homepages/45/d285268989/htdocs/mummymcauliffe.com/wp-content/plugins/gravityforms/common.php on line 4815
 Do you have the fancy dress gene? | mummymcauliffe
Previous Post 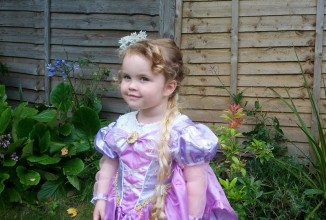 Do you have the fancy dress gene?

I have always been completely rubbish at fancy dress. I can never seem to sum up the enthusiasm that’s needed to pull it off. I always leave my costume until the last minute to organise, and then it’s a last minute panic to sort out some kind of half-hearted effort. I have always admired my friends who are able to pull off an amazing costume idea, without looking like a total idiot.

I partly blame my mum for my ineptitude when it comes to fancy dress. As a child I always seemed to have the most embarrassing, make-shift costume. My worst memory of fancy dress as a child was dressing up as an ice cream cone, when we covered a laundry basket with a sheet and I had to stand for hours with it on my head. Or the one where I was a netball post and needed to stand with my arms out in front of me to make the hoop!

Ouch, what’s that I feel on my shoulder? Could it be a big chip?!

Anyway, somehow my daughter has acquired the fancy dress gene. She is rarely without some piece of costume accessory or outfit. It certainly helps that she has an incredibly vivid imagination, and when she dresses up she instantly transforms into the role of her new character. Many are Oscar-worthy performances.

Being a very girly girl, the majority of the time she is role-playing some sort of princess or fairy and will only respond to her character name. So when we were asked to review a fancy dress costume by Jokers’ Masquerade, I wasn’t at all surprised when she quickly narrowed down the impressive selection of fairytale costumes to one that came complete with a Rapunzel hair extension! Why weren’t these things available in my day? 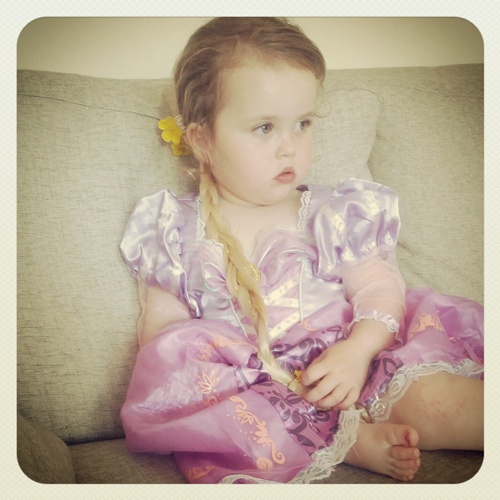 The Rapunzel costume is stunning and Little I has lived in it since the day it arrived. It seems to be standing up pretty well to the usage. Once I’ve helped her pull the dress over her head she emerges with a dreamy, serene smile on her face. I have to say, “Wow, who’s there, where’s [Little I] gone?” She’ll reply, “I’m Rapunzel” with a massive beam on her face. Even her body posture changes; she seems to grow a couple of centimetres and evidently feels incredibly important.

The hair extension stays put via a small comb, which tucks nicely into a ponytail. Luckily for us it is very close to Little I’s actual hair colour and so she can benefit from the full effect.

I can’t help but feel that I really missed out on the dressing up stage of my life. It’s one of those things that’s a bit like Marmite though – you either love it or you hate it, as a child and as a grown-up. I wonder whether I’d like it more now if I’d have had a beautiful Rapunzel costume as a child?