Warning: "continue" targeting switch is equivalent to "break". Did you mean to use "continue 2"? in /homepages/45/d285268989/htdocs/mummymcauliffe.com/wp-content/plugins/gravityforms/common.php on line 4815
 Date night at Monty’s Lounge | mummymcauliffe
Previous Post

I can’t remember the last time my husband and I went out together on a Saturday night…seriously! Before Little I arrived I remember us discussing how we would try to get out once a month still, which we managed to achieve for the first couple of months. But I think we quickly realised that we’re not very good at forward planning when it comes to our own social life. Before Little I arrived we tended to be a bit impulsive about going out, but it’s not quite as easy when it means finding a babysitter at short notice.

So last week we decided to be organised and book my Mum to babysit, so that we could enjoy a nice meal out. We headed for Monty’s Lounge, an eclectic bar and restaurant which has recently opened up the road from us. I’d previously been there for tea and cakes with a friend and had been dying to try out the restaurant.

Some might be put off by the location of Monty’s, which is just a couple of doors down from Pokesdown train station, amid the new ‘vintage quarter’ of shops. But the area certainly needed something like this, and once inside, the ‘Lounge’ part of the establishment becomes very obvious.

We were greeted by James Druce, the proprietor, who has worked at Raymond Blanc’s Le Manoir Aux Quait Seasons – a restaurant which is definitely on my bucket list. We were shown to a table towards the back of the restaurant, which has a very relaxed atmosphere and comfy booth seating. There’s lots of space between tables, so they’re certainly not trying to cram people in; and we immediately got the feeling that we’d be welcome there for the whole evening.

We ordered some mixed olives while we perused the menu. At this point I wished I could order a bottle of wine, if I wasn’t pregnant, as the bottles were lined up behind me shouting “drink me”!

It would be impossible to have a restaurant called ‘Monty’s Lounge’, without selling a burger called ‘The Full Monty’.  It was a foregone conclusion that Andy would plump for that. 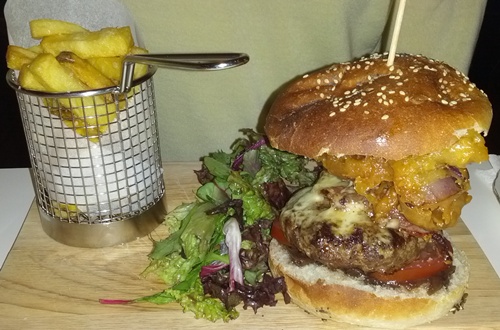 I opted for the special, which was locally sourced trout on a bed of pea risotto, garnished with parsnip crisps. 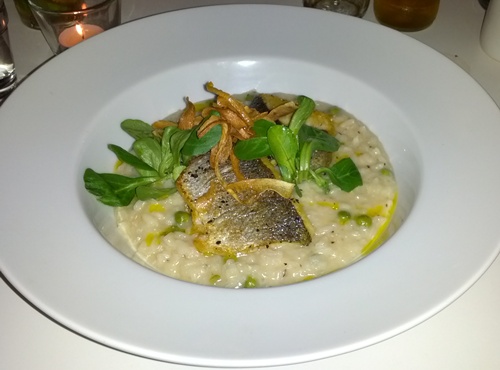 The food arrived, beautifully presented. Risotto is one dish that I struggle to get right, despite my many attempts, and so I couldn’t wait to dig in. It was delicious, with just the right amount of bite and lashings of cheese. The trout was gorgeous too and cooked to perfection. It was a nice size portion and I was suitably stuffed by the end. Andy equally enjoyed his gourmet burger and fries, which he managed to polish off very quickly.

We both needed a break between main and dessert, to make room for more. James was a very attentive host, and explained his ethos for Monty’s Lounge. Seasonal, locally sourced ingredients, and affordable price points are high priority for him. Living by the sea and the forest, there’s a wealth of local ingredients we have access to, so it’s nice to see a local restaurant living by those standards.

Moving onto dessert, Andy ordered the chocolate mousse (which sadly I couldn’t try as it contained raw eggs). 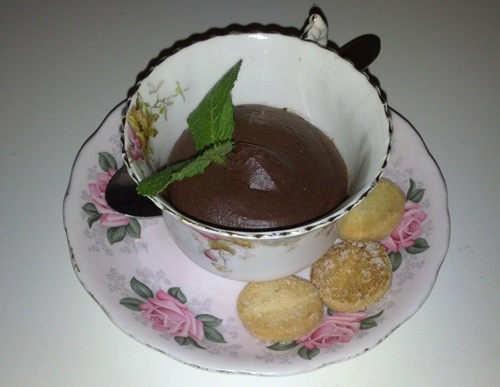 I chose the sticky toffee pudding. Both were delicious and again, beautifully presented. I could have done with a little bit more toffee sauce though! 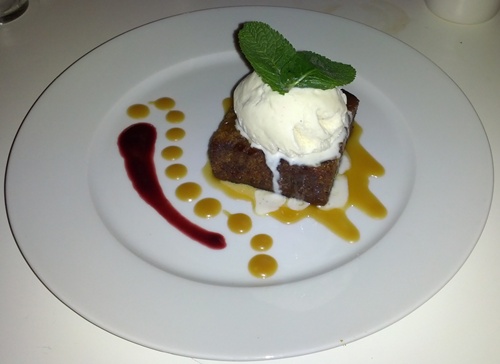 A new, larger menu is apparently launching soon, which I’m very keen to try. Monty’s even plans to begin making its own ice cream, and brewing its own beer soon. We’ll certainly be going back. It’s great to find such a chilled-out restaurant, with great food, within a five minute walk from home.