Warning: "continue" targeting switch is equivalent to "break". Did you mean to use "continue 2"? in /homepages/45/d285268989/htdocs/mummymcauliffe.com/wp-content/plugins/gravityforms/common.php on line 4815
 “When nurture calls”...the hard-hitting campaign to support breastfeeding in public | mummymcauliffe
Previous Post

Published by Wendy McAuliffe In In the News 1 Comment

Would you go to a cafe, buy a coffee, and then sit in the toilets to drink it? I’m presuming in most cases the answer would be ‘no’! So WHY is it acceptable for some business owners to ask a nursing mum to feed their hungry baby in the toilets? The logic baffles me. I seriously struggle to understand what people find so offensive, when all that’s happening is a baby being nurtured in the most natural way possible.

Sadly, in the UK and US, breastfeeding in public is not the norm. While the UK might not have it culturally right, at least mums are protected by the Equality Act 2010. It states that businesses must not discriminate against a woman who is breastfeeding. That’s not to say businesses (or members of the public) always comply though. It’s no wonder that only 1% of mums in the UK are still exclusively breastfeeding their babies by six months.

However in the US state of Texas, there is no equivalent legal protection, and some mums are forced to feed their babies in public toilets when they are shamed from feeding in public.

Enter the hard-hitting campaign, “When Nurture Calls”, by art students at the University of North Texas, which depicts a series of images of mums breastfeeding in unsanitary, cramped conditions. The most poignant of all the images, in my opinion, features a young teenage mum.  So rarely do you see images of teen mums breastfeeding within ad campaigns that it pulls at my heartstrings even more. With breastfeeding rates so low among teens, if only more could be done to give them support and encouragement, particularly when in public and around their peers. 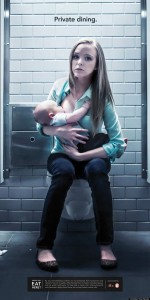 The campaign has been designed to drive home the idea that breastfeeding mums, and their babies, deserve better. Its intention is to drum up support for HB 1706, a bill in the Texas state legislature that would protect breastfeeding mothers from harassment and discrimination. The campaign has been produced with no real ad budget or funding, but it’s rapidly going viral and it’s easy to see why.

“It means we did our jobs right as art directors in creating a campaign that is getting real responses, and as students, it’s been a wonderful feeling,” Jonathan Wenske, one of the students responsible for creating the ads, told The Huffington Post.

I truly love the campaign and I hope it helps to make a difference. The images have etched themselves in my mind, and it would be lovely if they help to change the attitudes of at least a few people.

Breastfeeding in public is something I really struggled with first time round. I seemed to be such a cluts with it, exposing myself far more than was necessary and never quite managing to be as discreet as I wanted to be. That’s not to say you need to be discreet…it was just what I personally felt most comfortable with.

Second time round, I’ve found I’m a lot more confident feeding in public and am far more nifty with the old muslin! When Wolfy was just a couple of weeks old a new (breastfeeding) mum complimented me on my discretion, and I had to laugh as I thought, it’s only taken me four years to get to this point. I made sure I told her that!

For Little I, I’m trying to make breastfeeding in public seem as normal as possible. If we’re heading out to a cafe on a weekend, there have been occasions when she’s taken a baby doll with her, and a muslin for breastfeeding! She often says, “there’s a quiet table, Mummy, where we can feed our babies!” While I try to be considerate of others, I am also proud to nurse my baby in public, as I’d love for perception to have changed by the time Little I is a Mummy.