Warning: "continue" targeting switch is equivalent to "break". Did you mean to use "continue 2"? in /homepages/45/d285268989/htdocs/mummymcauliffe.com/wp-content/plugins/gravityforms/common.php on line 4815
 What is the future for discipline in the classroom? | mummymcauliffe
Previous Post 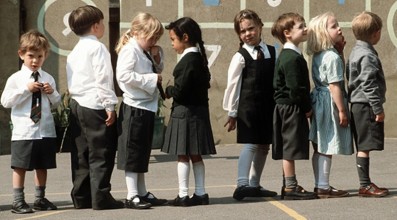 What is the future for discipline in the classroom?

Published by Wendy McAuliffe In In the News No Comments

Fifty-seven per cent of teachers believe pupils’ behaviour has deteriorated over the last five years, according to a recent survey published by the Association of Teachers and Lecturers (ATL).

At its annual conference this week, members of the ATL voted unanimously for research into ‘effective’ disciplinary methods, and discussed the need for greater sanctions.

As reported in the Mail Online, the association’s general secretary Dr Mary Bousted said: “Sanctions do have to be something students don’t want to have to endure. We’re not saying at all that children should fear teachers but they should respect them. If they go beyond the bounds of respecting a teacher there should be sanctions. And those sanctions should be something children would rather not face.”

I’m no teaching expert, but from speaking to teacher friends and experts, discipline in the classroom is becoming an ever increasing challenge. “Behaviour in classrooms now, in some schools/areas (not all, I know), is not what it used to be when we were at school and it is the low level stuff that is the hard slog,” explains one teacher friend of mine.

It seems this deteriorating behaviour is a problem across the board. Dr Bousted, argues: “Bad behaviour isn’t just the preserve of poor children and parents. It occurs among all classes of society.’

Overall, I was a good girl at school. My parents taught me the value of a good education from a very young age and I was brought up to respect my teachers. I had a healthy amount of fear of the consequences of playing-up in the classroom. I was fearful of how the teachers would respond, as well as how my parents would when they found out. I question whether that ‘fear’ is still instilled in children by their parents? One child psychologist who I spoke to recently talked about “the middle class Mum’s ethos that is very child-centred”, where children are “hot housed” and “provided with devoted one-to-one attention and stimulation”. I don’t profess to find discipline an easy thing, and I find I am constantly learning about it and making mistakes, but I do firmly believe in the need for it.

A teacher friend of mine concurs: “I think sometimes it’s the parents who would benefit from some lessons in discipline. You can’t expect a teacher to take on the role of a parent as well!”

But middle class society isn’t the only part of the equation – the issue is the same in more deprived segments of society.

One teacher friend of mine shares: “We have children who are woken up in the night by police raids, we have children who are carers for their parents but not in an official ‘Children in Need’ kind of way – just because mum can’t get up because her hangover is too bad and they have to make their siblings breakfast and lunch, get them dressed and get them to school on time.  Basically we have some kids who deserve a medal for getting to school each morning.  I’m not surprised they play up – I think I would – but I can’t and won’t allow it.  Children need firm boundaries and feel safer when they have them.  They need to know that at school, at least, the boundaries are firm and don’t budge.  This means they will constantly push them and test them.”

The classroom needs to be a place for learning. “School is the place where children and young people enter civil society really for the first time,” Dr Bousted argued in her keynote speech at the conference. “If everyone just did what they wanted in school, it would be chaos. There are rules, there’s a timetable, there are ways we have to behave towards a teacher and, crucially, towards other children.”

In my day, behaving in the classroom wasn’t a ‘choice’, it was simply what was expected. Of course there were instances of individuals messing about (usually boys I hasten to add!), but we never challenged the sanctions that were in place for bad behaviour. Over the years I can recall several children being suspended or excluded for persistent bad behaviour. I know that my sheltered experience isn’t really that relevant to the current situation that teachers are facing across all segments of society, but I do feel that children sometimes see participating in school as a ‘choice’ now, rather than a given. You only have to visit our local skatepark on a weekday during school hours to see the evidence of that!

I’m sure few parents or teachers would argue for a return to corporal punishment, but in some instances, I do feel greater sanctions are needed. As a parent, I want my daughter to have the opportunity to learn at school and know what’s expected of her, and overall have a positive experience of school.

A teacher friend explains: “There are so many hoops to jump through, so many forms, so many appeals panels etc, it is so hard to do anything and everything takes so long.  It is only in rare cases that this is necessary but I think if children knew these sanctions (whatever they were) were there, it may be more of a deterrent.”

This is clearly a very big subject, and one that I’m sure individuals will have their own opinions on. If you’d like to contribute your thoughts, please use the comments section below.