Warning: "continue" targeting switch is equivalent to "break". Did you mean to use "continue 2"? in /homepages/45/d285268989/htdocs/mummymcauliffe.com/wp-content/plugins/gravityforms/common.php on line 4815
 Is Peppa Pig a bad influence? | mummymcauliffe
Previous Post 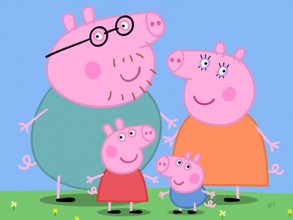 Is Peppa Pig a bad influence?

Published by Wendy McAuliffe In In the News 12 Comments

“Mummy, I’ve been waiting for ages and ages. It’s SO BORING!”

In our household, the cheeky Peppa Pig has recently had a lot to answer for. Without any exaggeration, I’d attribute 75 per cent of Little I’s post-Christmas cheekiness and general answering back to our friend Peppa Pig.

Don’t get me wrong, I think Peppa Pig is a really lovely TV programme that is educational as well as entertaining, containing some brilliant humour. I often find it a useful source of reference for explaining general life lessons to Little I, such as why Mummy has to work, why it’s important to wrap up in the cold, what happens at pre-school, etc.

Generally we restrict Little I’s viewing to half an hour before bedtime, and occasionally a little more if she wakes up particularly early, or if I need a ‘babysitter’ while I’m cooking. But over the Christmas period rules were relaxed and she ended up watching a fair bit more. As a result, I can truthfully say that I’ve observed far more cheekiness in Little I’s behaviour, and the proof is in the language, as above.

Of course children love to imitate, and that’s all part of their personality development. Currently Peppa Pig seems to be the biggest influence, but I’m sure that will soon be replaced with Lola or god forbid, Norman Price! But it seems I’m not the only parent who’s noticed the negative influence of Peppa, according to this recent article in the Daily Mail, entitled “Is Peppa Pig making toddlers naughty? Parents despair as children copy cartoon by answering back.”

The article, which is based on parent conversation on the Mumsnet forum, claims a growing number  of parents are turning against the TV character Peppa Pig, claiming she is a ‘bad influence’. The full conversation thread is an interesting read, which offers a very balanced argument, with some parents supporting the criticism of Peppa Pig, and others defending her. One parent says, “I don’t like Peppa Pig. She is a horrible rude brat who never gets told off.”

While there are numerous passionate responses, I really support this next comment which helps to give some perspective to the whole discussion: “This is life isn’t it? They see someone behaving differently to them – be it Peppa Pig, Horrid Henry, bloody Hannah Montana … or…someone at school or nursery – and they try it out for themselves to see what the response is. It is the response that matters!”

In our case, our relaxation of TV rules over the Christmas period (on one morning, two new Peppa Pig DVDs were played back-to-back for Little I and her cousins), has proven a bit too excessive, and we are now dealing with the consequences.

Within the Daily Mail article, psychologist Dr Aric Sigman explains: “Some 80 per cent of brain development is between birth and three years old, so if they spend a lot of time watching the TV, they will copy forms of behaviours that they see on the TV…The problem is you can’t distinguish to children what is real and pretend. You can’t just say to the child the pig was only pretending it was naughty.”

So the lesson for me and my husband…Peppa Pig is fine, in moderation! How about you? Do you have an opinion on the subject? Please feel free to comment below.