Warning: "continue" targeting switch is equivalent to "break". Did you mean to use "continue 2"? in /homepages/45/d285268989/htdocs/mummymcauliffe.com/wp-content/plugins/gravityforms/common.php on line 4815
 How do Mums feel about their work-life balance? | mummymcauliffe
Previous Post 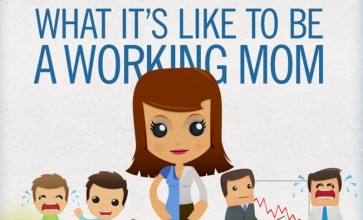 How do Mums feel about their work-life balance?

Published by Wendy McAuliffe In In the News 4 Comments

Within a recent US survey of 250 working mums, which looked at the challenges of balancing a career and a family, 55 per cent admitted that “the struggle to excel at both is overwhelming.”

I am easily a part of this statistic. I have had so many highs and lows since returning to work after having had my daughter, all glued together with a large helping of ‘Mummy guilt’. I think any working Mum will know what I’m talking about. The guilt of leaving our child with someone else, the guilt of constantly feeling like you aren’t spending enough time with them during those precious pre-school years, combined with the guilt that your work-related achievements are suffering because you can no longer give your career the undivided focus that you used to. And of course on days when you’re tired and have had a broken night’s sleep, that guilt is amplified tenfold!

[As irony would have it, I am writing this post in between comforting my daughter who is running a temperature and seems unwilling to settle for the night!].

Another revealing part of the survey was that when it comes to identifying the most important job requirement for a working mum, 44 per cent said they would choose “flexible working hours”, 29 per cent cited “the ability to work from home”, and 20 per cent showed a preference for “convenient working hours”.

I am very lucky in that I have all three of these, to some extent. Of course in practical terms when I am drowning in deadlines and workload, the reality becomes a lot more constrained…but there is a lot to be said for being your own boss when you have a family to think about too. I set-up my first small company in 2006, a few years before I had Little I. So luckily when it came to setting up my second business, Populate Digital, just after my daughter’s first birthday, I had a better idea of what I was doing!

There are some days when I really cherish being my own boss, like today when my Mum phoned me half-way through the morning to say that Little I really wasn’t looking well, and so I was able to drop what I was doing and go to pick her up for Mummy cuddles. I’ll be paying the price tomorrow, but it was worth it just to be able to be there for Little I when she needed me.

But similarly, when you are running a business there’s an awful lot of responsibility that comes with it. The buck stops with me for bringing in new business, and for ensuring that projects and campaigns run smoothly. So although there are lots of perks to running your own business as a Mummy, it’s definitely not an easy option. Sometimes I reminisce about the times when I used to be able to take paid holiday and proper sick days, but then I remind myself of all the additional time that I get with my daughter by working at home and being relatively flexible over the hours that I work.

Another finding from the survey which I can easily relate to is that 16 per cent said they always “put their family first and their career has suffered for it”. To be honest, I am surprised this stat isn’t higher, but if you combine it with the 55 per cent who admitted the career/family struggle to be “overwhelming”, that’s an easy majority of mums who have seen their career take a back seat after having had children. I’m not sure I believe those 13 per cent of mums who say they have the work and family balance under control. Do they really mean that? I’m sure some days it might feel that way…until it all goes belly up when their child comes down with chicken pox, or they are needed to fly overseas for an important meeting at a time when they can’t get any childcare.

I’m told it gets a bit easier when the children start at school, but then you have the school run to deal with and their increasingly hectic social lives.

Either way, whatever weighting and priority you choose to give to your family and career, there is always going to be some compromise…unless you are able to magic an extra five hours into each day. It’s finding a compromise that you feel happy with that’s the difficult part. Has anyone managed to do this? Or do you feel it’s unachievable and that the struggle will always be there? If you have any nuggets of wisdom to share, or you just want to offload, please do so here!