Warning: "continue" targeting switch is equivalent to "break". Did you mean to use "continue 2"? in /homepages/45/d285268989/htdocs/mummymcauliffe.com/wp-content/plugins/gravityforms/common.php on line 4815
 Can ‘Babies in the Office’ really work? | mummymcauliffe
Previous Post 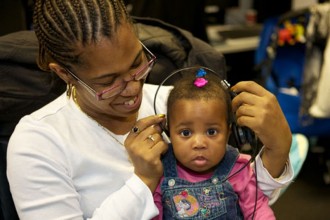 Can ‘Babies in the Office’ really work?

Published by Wendy McAuliffe In In the News No Comments

I have been working for myself from home since 2006, and so when I fell pregnant with Little I in late 2008, my hope was that I would be able to return to work fairly quickly. As I’m sure all first-time Mums do, I’d imagined I’d have an idyllic baby who would nap for hours leaving me with plenty of time to work from my home office.

The reality, of course, was very different. Little I was a very colicky baby who cried an awful lot, didn’t like being put down, and napped very little throughout the day. I also hadn’t factored in how tired I would feel from broken nights of sleep, and so I rather quickly abandoned all hopes of returning to work quickly.

Eventually I returned to work part-time when Little I was eight months old. I was lucky enough to have family and my husband to help out with childcare, but since I was still breastfeeding I found the whole process to be incredibly emotional and difficult. I completely hated being separated from my baby and to be honest, I still do.

So BBC2’s documentary this week, Babies in the Office, has had me on the edge of my seat. For those who missed it, Britain’s busiest minicab firm Addison Lee has been running a scheme that encourages parents to bring their babies to work. Both Mums and Dads took part, at all levels of the business. Initially it was a one-day trial, which proved successful enough for MD Liam Griffin to extend the pilot for one month. At the end of the experiment employees faced an open, company-wide vote to decide whether or not the scheme should be formalised and continued. A clear majority voted in favour!

According to the BBC documentary, one quarter of women who go on maternity leave do not return to work. Soaring childcare costs are one of the reasons cited for this, combined with a lack of flexibility and support for working mums. Since many women are choosing to have babies in their 30’s this means that many businesses and organisations are losing an important part of ‘middle management’, and a large proportion of women are also losing their footing on the career ladder. Liam Griffin’s main motivation for his ‘babies in the office’ scheme was to retain this segment of his workforce, for the longer term, in exchange for a shorter term drop in their productivity. He was also hoping that in changing office culture, it would have a positive effect on team morale.

Addison Lee has proven that within one organisation, the concept of parents taking babies into work with them can work. It wasn’t for everyone, with a couple of mums choosing to drop out of the scheme. But for most it was a revelation that they could work while having their baby next to them. One exceptionally inspiring mum within the programme, Shallon, a mother of six, managed to exceed her team’s average daily level of productivity!

Attempting to find the balance between work and family is the ‘holy grail’ that all working mums are looking for. Sometimes the ‘Mummy guilt’ can be overwhelming, but for many, there is little choice in the matter. But what if there really was a solution out there, which allowed mums to go back to work as soon as they feel ready, taking their babies with them?

How wonderful would it be if this became culturally acceptable within the UK, as it is within the US? Since becoming a mum I’ve felt myself under pressure to compartmentalise my life, keeping my family out of work and vice versa. But why should it have to be that way?

When Little I was about 18 months old I was let down with childcare at short notice due to illness, on a day when I was meant to be attending an important meeting in London. I really didn’t want to cancel but the only alternative was taking Little I with me. Fortunately the meeting was with someone who I knew had three children, so I called her at short notice and asked if she’d mind me bringing my daughter with me. She loved the idea and decided to bring her two-year-old too! We travelled up together on the train, Little I behaved herself beautifully, and we talked business over delicious cupcakes. It turned out to be an incredibly positive and liberating experience.

Of course there would be days when things don’t go to plan…your baby is teething, has a stinking cold, has been up all night and is grumpy etc. But if it’s the norm for parents to bring their babies to work, expectations of those around you should hopefully be managed realistically, helping to ease the pressure.

I’ve been truly inspired by Addison Lee’s trailblazing scheme and I truly hope other businesses in the UK will follow. Why should women be disadvantaged in their career paths, or separated from their babies before they are ready? It’s about time things changed.

If you didn’t get to see the BBC2 programme, it’s available on BBC iPlayer and is well worth a watch.

Please share any thoughts that you have on the subject. I’d love to get a debate going!

Image courtesy of the BBC.