Warning: "continue" targeting switch is equivalent to "break". Did you mean to use "continue 2"? in /homepages/45/d285268989/htdocs/mummymcauliffe.com/wp-content/plugins/gravityforms/common.php on line 4815
 Work, rest or play? | mummymcauliffe
Previous Post 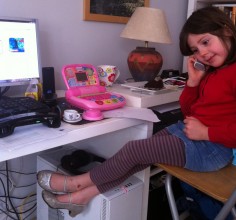 Published by Wendy McAuliffe In Guest Posts No Comments

This guest post is authored by my good friend Jane Wakefield, who is a technology reporter for BBC News Online.

My two go to school now which in theory gives more ‘me’ time but inevitably, on the days when I don’t work I am running around catching up with chores, food shopping and attempting to keep my now 20-year diet on track with regular visits to the gym.

All of which means that the novel, which I had intended to use my ‘me’ time to write, is still very much an idea in a dusty corner of my brain.

Once my youngest started school, my bank balance also started demanding attention and, unable to fend it off with the promise of Booker Prize money, I reluctantly agreed to add an extra work day to my already packed schedule.  Even less ‘me’ time.

One of the strange things that happens when your children start school is that they suddenly get a social life – and generally it is far better than yours.  Add play dates, birthday parties and after school activities to the mix and where does that leave ‘me’ time?  I’m sure I can leave you to do the maths.

The school run, for those of you yet to be initiated into it, is a chore in itself. It is a bit like that black and white sci-fi film where a knell sounds and everyone stops what they are doing to walk zombie like to a central gathering point in front of an ominous looking monolith.

With the alien, I mean school run, time goes on to steroids. You drop the little darlings off and you have exactly six hours to fit in all the boring stuff and leave enough time for what you really want to do. Wind yourself up to the highest setting and get going. Quick!

‘Me’ time on such a day usually translates as half an hour to grab a cup of tea (drunk standing up) and a glance at daytime TV. And there really isn’t anything less demoralising for ‘me’ time than five minutes spent in the company of either Jeremy Kyle or someone trying to persuade me to move to the country.  Although they do say time goes slower in the countryside so maybe that is the answer to my problems.

My busiest day of the day of the week is when I work from home. I am forced to juggle writing articles with doing the school run and shoe-horning in two afterschool clubs for good measure.

It was nice then when the Easter holidays meant I could drop three of these and concentrate on work.

I told my five-year-old daughter that she could spend the day playing at home – something she loves to do and is happy doing by herself most of the time – but she chose, presumably without irony, to work.

She got out her laptop, her Hello Kitty cup and saucer and a large slice of cake – I tried to explain to her that this was unrealistic as I never eat cake at my desk but she just looked at me as if to say, “More fool you”.

When I was on the phone, so was she – arranging, apparently to go and see some purple jewels -which sounded far more interesting than my chat with Facebook about government snooping laws.

As I was writing articles, so did she – and her first foray into the world of journalism was superbly entitled ‘why it is hard working from home”.

She had also unwittingly solved the problem I have spent years trying to solve. You don’t have to balance work and play – you can do both together.

It was one of my best workdays for a long time and I think she had fun too.

The lesson she taught me is that I need to spend at least some of my time, precious though it is, searching for purple jewels. Or put less like Oprah, having fun.

Rather than seeing all the daily tasks as chores to be got out of the way to free up for ‘me’ time, I now intend to try and enjoy them in their own way and create something useful out of them.

So comes my very first ever blog – I know I am shockingly late to it but I have been busy, you know.

And, of course, it will have to be on a part-time basis as I really don’t have enough time to do it full-time!

The only reason I had time to do it at all was because my children have an after-school play date!