Warning: "continue" targeting switch is equivalent to "break". Did you mean to use "continue 2"? in /homepages/45/d285268989/htdocs/mummymcauliffe.com/wp-content/plugins/gravityforms/common.php on line 4815
 The day we dialled 999 | mummymcauliffe
Previous Post 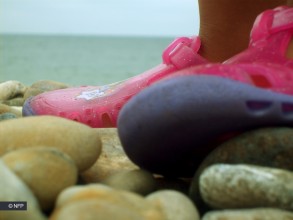 A big part of me doesn’t want to write this post, but another part of me is coaxing me on, telling me it’s an important event in Little I’s life that I need to document, before the raw memories fade.

Maybe I should begin with the biggest lesson we are taking away from this incredibly traumatic experience. Always wear jelly shoes on the beach! My three-year-old daughter wasn’t, and I wish to God she had of been. It may have prevented a very nasty accident.

It all began on Wednesday afternoon on Hengistbury Head beach, which is a beautifully scenic, but remote, headland in Bournemouth. Little I had scooted all of the way, and as soon as we arrived at the beach she stripped off and rushed towards the sea for a paddle. I was right behind her, but on her way to the water’s edge she tripped and fell. I thought she’d fallen over a stone and went to help her up, but she screamed out in terror. Panicking I looked at her foot and saw she had a sea fishing weight impaled into her big toe. Huge metal spikes were sticking out of the weight in all directions, and one of them had gone straight into her big toe.

I looked to see if I could get it out, but it had gone in so deep and I was too afraid to do anything. Because of the weight attached I couldn’t pick her up. The smallest movement made her scream out in terror. Thank goodness my husband was with me.  His phone battery was dead but thankfully mine was fine. I had no mobile signal as the O2 network was down, but we managed to call 999 via the emergency network. My husband tried his best to explain where we were, but because we were using the emergency line the person intercepting our call had no idea where in the UK we were. The phone call took ages, but finally we were told an ambulance had been dispatched. My husband ran off to meet it.

I was left on the beach with Little I who was in a huge amount of pain. She was so incredibly brave and never once lost control. All I could do was to hug her tightly and do my best to keep her calm, but seeing her in such pain was unquestionably the most horrific thing I have ever experienced. She did her best to deal with her pain by sucking frantically on the sleeves of her top. The only thing that kept her going was the promise of a pink ice cream when it was all over (which she absolutely got!).

The paramedic took almost an hour to arrive, by which point I was on the brink of losing the plot. He gave Little I some Calpol and told us an ambulance was near. When the ambulance arrived she was given morphine which kicked in almost straight away, and took the pain away. But the problem of the weight remained. Moving Little I with the weight attached would undoubtedly have caused more damage, and so the weight needed to be cut from the metal spike. There was nothing for it but to call for a fire engine, which came quickly. The firemen were wonderful and managed to swiftly cut the metal without Little I getting too distressed.

What followed was a very drawn-out and stressful six hours, involving many conversations and consultations, and two different hospitals. Words can’t describe how well my daughter coped with events. She was so brave and mature, didn’t complain once, and made us so proud to be her parents.

Finally at 10pm Little I was put under a general anaesthetic and the metal spike was removed from her toe in theatre. I was beside myself with worry while she was in theatre, and watching your child be put under general anaesthetic is something that I hope we never have to go through again. But I am so incredibly grateful to the consultant who performed her surgery, and to the wonderful nurses who looked after her. The surgery thankfully was straightforward and we were reassured that everything should heal well. When I went to meet Little I in the recovery room she was sleeping soundly, and she was wheeled to the children’s ward for observation and a well deserved night’s sleep.  The next morning she woke in extremely good spirits, completely un-phased by all that had happened the previous day. She was discharged around midday and is now doing really well, and already wanting to role play what happened!

This is the part of parenting that I really struggle with. So far we are averaging one trip to A&E each year, but it never gets any easier and this event was undoubtedly the worst. Your world genuinely stops spinning when your child is injured and in pain, and it’s so easy to lose all sense of perspective. My husband was my rock and really helped to keep me strong. I am so grateful he was with me.

There are a few lessons that we’re taking away from this, which I thought may be useful to share:

I’ve estimated that overall, one fisherman’s mistake cost the NHS/fire service a combined total of approximately £1,000, not to mention the pain and trauma that Little I endured. I hope and pray we won’t need to call on the emergency services again.