Warning: "continue" targeting switch is equivalent to "break". Did you mean to use "continue 2"? in /homepages/45/d285268989/htdocs/mummymcauliffe.com/wp-content/plugins/gravityforms/common.php on line 4815
 Dealing with a stammer in a two-year-old | mummymcauliffe
Next Post 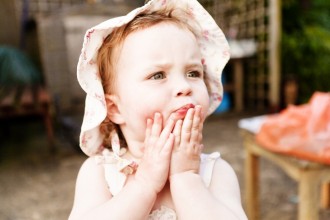 Dealing with a stammer in a two-year-old

A week or so ago, my two year-old daughter suddenly developed a stammer. It began one morning, completely out of the blue, and so far hasn’t left us. It took us a bit by surprise as she was an early talker and has been conversing with us in proper sentences for quite some time – so initially this seemed like a bit of a set-back. I was searching my mind for something that could have triggered it, and worryingly she’d had a nasty bash to the head the day beforehand, which despite recovering quickly from, I had the niggling worry at the back of my mind that the stammer could be connected to that (thankfully we’ve been reassured by an expert that this is highly unlikely).

Over the past week I’ve done a lot of reading on the subject, and have received some excellent advice from a speech and language therapist (SLT) based in Dorset, and so I thought it might be useful to share my findings here for any parent who finds themselves in a similar situation.

My overall learning has been that it isn’t abnormal for a child between the ages of two and four to develop a stammer. According to the British Stammering Association (BSA), it affects one child in 20. Evidence shows that in most cases children grow out of this phase, over the course of a few weeks or months. All advice that I’ve received has underlined the fact that I don’t need to worry, at least not for now (easier said than done of course!).

The BSA website is a wonderful resource, and houses all of the information that a parent might need on the subject. They additionally offered me very useful information over the phone, and put me directly in contact with a local SLT so that I could self-refer my daughter, instead of going via our GP. Incidentally, although our Health Visitor was helpful, she said to leave things for six months to see if the stammer corrects itself, whereas the BSA advises that it’s far better to seek advice and possibly treatment as soon as possible in a pre-schooler.

There are certain things that a parent, childminder or nursery teacher can do to help a child who’s stammering – a comprehensive summary is available on the BSA website.

To summarise the advice that I’ve been given:

We have now self-referred our daughter to a local SLT, who we’ve had a phone consultation with initially. We have been advised to make an appointment in two month’s time if there’s no improvement in the stammer, and sooner if it’s getting worse. Apparently the earliest a SLT would see a child is 2 ½.

If you have any experiences to share on the subject of stammering, please feel free to use the comments section below.