Warning: "continue" targeting switch is equivalent to "break". Did you mean to use "continue 2"? in /homepages/45/d285268989/htdocs/mummymcauliffe.com/wp-content/plugins/gravityforms/common.php on line 4815
 Recipe for healthy homemade granola | mummymcauliffe
Previous Post

I’ve always bought into the school of thought that breakfast is the most important meal in the day. I don’t always have a massive appetite for it, but I never skip it. Little I simply adores breakfast time. One of the first things she always says to me in the morning is “what are we having for breakfast, Mummy?”

I’m not a big fan of cooked breakfasts. I enjoy them as a late breakfast/brunch, but on an average day I prefer something lighter. Granola and full-fat Greek yoghurt has been one of my staple breakfasts for quite some time – I think since after our holiday to Corfu a couple of years ago. But the problem with shop bought granola is that it is often packed full with sugar.

We have a rule in our house regarding breakfast cereals. I don’t ever buy any that are ‘unhealthy’ or ‘sugary’…basically the ones that are marketed to death to children. Little I didn’t even know that Coco Pops existed till a few months ago. The reason being, it’s a slippery slope once you’re on it. I know that from recent experience, since as a treat I bought chocolate Pop Tarts for our recent caravan break in Devon, and Little I has not stopped asking for them since.

So recently we had a go at making our own granola and it was such a success that I thought I’d share the recipe with you. It makes a great start for the day, and easily fills me up till midday. What’s more it’s quite good fun to make with the kids, even though it involves a small amount of cooking. 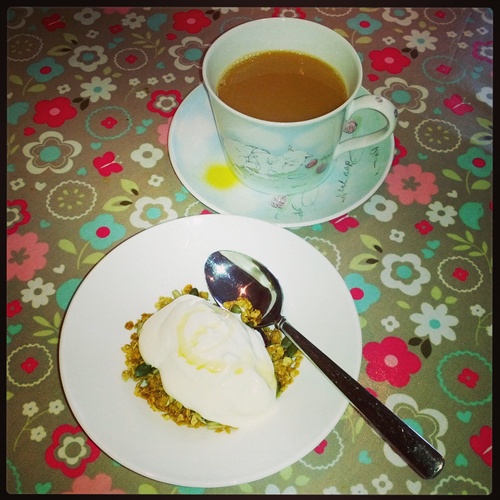 Ingredients you’ll need (I had a lot of these in our food cupboard already, but if you’re buying everything from scratch it may seem a bit pricey initially)

300g porridge oats
150g-200g honey
50g coconut oil (the hard kind, which can be bought from most health food shops and is amazing stuff. Here’s another yummy recipe which uses it)
200g mixed pumpkin and sunflower seeds
200g dried fruits and nuts (we used raisins, dates, cranberries and almonds). Next time I’m going to add some cacao nibs too.

2. In a saucepan, melt the honey and coconut oil over a low heat.

3. Remove from the heat and stir in the porridge oats until they are well coated with the mixture.

4. Pour the mixture onto a large baking tray and spread evenly.

5. Place the baking tray into the preheated oven and bake for 25-30 minutes or until toasted and golden.

6. In the meantime, place the pumpkin seeds and sunflower seeds in another baking tray and place in the oven to toast for about 20-25 minutes or until nice and golden.

7. Once the oats and seeds are toasted and golden, remove from the oven and leave to cool.

8. In a bowl, mix the toasted ingredients together with the dried fruits and nuts. Store in an airtight container and it should keep for at least a week (if it’s not all eaten sooner!)

To serve it’s lovely with a dollop of full fat Greek yoghurt, some homemade berry compote if you have the time to make it, and a dash of runny honey.

The first morning we tried our homemade granola, Little I gobbled hers up and immediately asked for seconds. Within the same breath she added, “maybe we should try making our own Pop Tarts too!” Hmmmm.

If you give the recipe a go, let me know what you think, and what dried fruits, nuts and seeds you decide to use.