Warning: "continue" targeting switch is equivalent to "break". Did you mean to use "continue 2"? in /homepages/45/d285268989/htdocs/mummymcauliffe.com/wp-content/plugins/gravityforms/common.php on line 4815
 Potty Training in One Week with Gina Ford...Days One to Three | mummymcauliffe
Previous Post 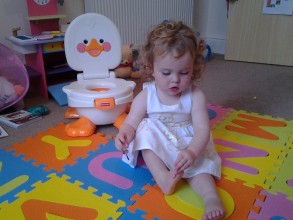 If you were to read all of the books written on potty training, and listen to every expert’s advice, in addition to friends’ and parents’ experiences, you would be one very confused Mummy! There is undoubtedly a case of too much information out there, matched with a huge gap in thinking between the way our parents potty trained us, and the way it tends to be done nowadays.

But when a couple of friends claimed that they’d had excellent results with the Gina Ford book ‘Potty Training in One Week’, I thought I’d give it a go. I had a week off work and so it seemed like a perfect opportunity. It’s probably worth saying that I really wasn’t a fan of Gina Ford’s baby advice, but her toddler advice seems a little more palatable.

The book is small and very quick to read, which I was thankful for. The instructions are simple and straightforward. In all honesty I was expecting the book to contain a far greater depth of information than it actually does – the advice really isn’t rocket science or anything that hasn’t been said before – instead it seems to cut out the clutter and offer a very clear and comprehensive potty training programme.

The book suggests approaching potty training in two stages – the first one being the preparation stage where you get your child used to sitting on the potty a couple of times a day, with no great expectations for them to actually do something on it; and then the second stage is the seven day training programme which will hopefully see results. We decided to completely skip the preparation stage as we’d introduced Little I to the potty several months ago and I felt we were actually further along than that.

So the night before commencing Stage One, I re-read the book cover to cover and made an attractive reward chart filled with my pictures of my daughter’s favourite book and TV characters, and had some star stickers on standby. I also copied out the Potty Progress Chart that is given as an example within the book, which is for the parent to record the child’s use of the potty throughout the first few days, to see how often the child needs to wee and to see whether potty use is self motivated or not. I found this chart to be an incredibly useful reference, as at the end of the day you can look back and get a much better feel for how successful progress has been.

For day one and two, the rules are fairly strict: the child must be put into ‘special big girl knickers’ straight after breakfast and it’s suggested that trousers and socks etc are left off. This was our first stumbling block as Little I insisted on wearing a “pretty dress” as she tends to do every day! From now on, nappies can only be worn for bedtime and naps if you prefer (although we’ve never needed to put one on for a nap).

Some of the key suggestions for the first couple of days are:

Personally speaking, I found the first two days of the programme hard work and a much more regimented approach to parenting that what we usually favour. Cabin fever was really setting in by the afternoon of day one and the glorious Autumn sunshine made it tough to stay indoors, but I was determined to stick to the rules. However, there was also something nice about the simplicity of staying at home with Little I and giving her my 100% attention; we found lots of nice activities to do together such as play-doh, a pedicure each, role-play games, painting, reading and baking cakes.

We were allowed to venture out of the house on day three, but Gina Ford suggests it’s only for short period. As it happened we had a birthday party to go to which was a little nerve wracking for me, but fortunately it was in a church hall that Little I was familiar with and she was excited to use the bathroom there. The really important message for day three is that regardless of how well or badly your potty training is going, don’t be tempted to put on a nappy for your first outing. Just be sure to take lots of spare clothes with you and a plastic bag for any soiled items. We also took a travel potty with us just in case.

By the end of day three, I was a little despondent. I was ashamed to admit to myself that I’d set very high expectations for Little I –she’s such a bright little button that I had expected her to get the hang of the training programme very quickly, but actually she didn’t seem to be having as many successes as the book suggested she might. I needed to remind myself that this wasn’t about being clever, this was about her body being ready for potty training. I was starting to feel a little out of my depth and questioning whether Little I was actually ready, but I’d set out to complete the seven day programme and so I encouraged myself to stick with it. For this reason alone I’d recommend Gina Ford’s book, as it gives you a clear target to work towards – I think I would have abandoned training by day three had I not been following the book.

For days four to seven, please read the follow-up post.