Warning: "continue" targeting switch is equivalent to "break". Did you mean to use "continue 2"? in /homepages/45/d285268989/htdocs/mummymcauliffe.com/wp-content/plugins/gravityforms/common.php on line 4815
 Our lesson in retinoblastoma | mummymcauliffe
Previous Post

Our lesson in retinoblastoma

When you have a new baby, you’re sent home from hospital with a stack of leaflets and booklets to read on everything from exercising your pelvic floor, to breastfeeding advice, to what temperature your baby’s room should be at night. I diligently read through most of these and there was one that really stuck in my memory. It was a flyer with a photo of a baby, with a white reflection in one of his eyes. It explained that a white reflex in one or both eyes within a photo where a flash has been used, can be an indicator of retinoblastoma (a rare type of eye cancer), which should always be taken seriously.

There’s been so much done to raise awareness around retinoblastoma over the past few years that I’m sure most of you probably know what I’m talking about. But since my GP had never had any parent come to her about it, in her 10 years of practicing…I felt this might still be worth blogging about.

We very recently had a retinoblastoma scare with my daughter. Coincidentally, friends of ours had been through the same worry and experience a month beforehand with their little boy, and it made such a difference having their understanding, knowledge and support to hand. Thankfully their son, and Little I, are fine.

I’d been in London with my daughter for the day during half term, and we’d stopped off at Pizza Express for a treat. This is one of a bunch of photos I took of her while she was eating her ice cream sundae, and I can honestly say my heart sunk when I saw the white eye reflex. 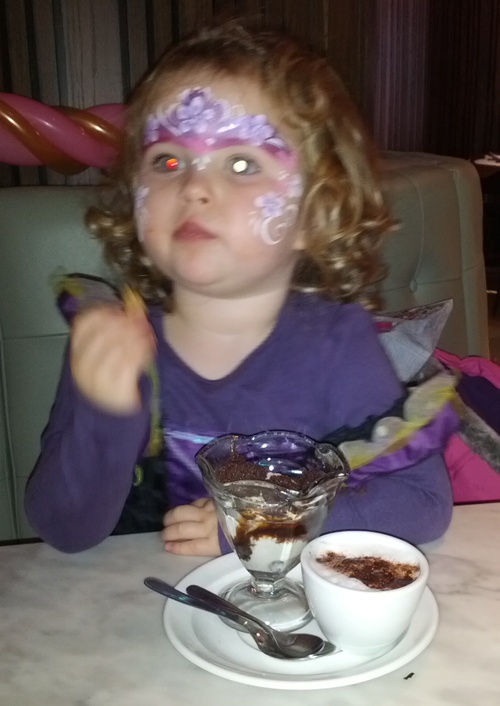 On showing the photos to my friends (mentioned above) that evening, they reassured me that the photos weren’t straight to camera, and so hopefully were no cause for alarm. But trawling back through hundreds of photos of Little I on my phone, I came across a few more with the white eye which I hadn’t spotted previously, including one in which she seemed to be looking directly at the camera. Their advice was to make an appointment with our GP as soon as possible, just to be on the safe side.

It’s at times like this that I’m so grateful for the NHS. When it comes to Little I, they’ve never failed us. We were given an appointment with our GP straight away, and the same day she had referred us as ‘urgent’ to the local eye hospital. The following morning we received a phone call to say we had an appointment, in just five days time. Five days I could manage – any longer and I most probably would have had a nervous breakdown.

I was consumed with worry for the next five days, and didn’t sleep much. As my friend said, it’s at times like this that it’s in “your job description” to do right by your child. I gained strength from this, and found it to be a useful reminder of what being a parent is ultimately all about.

Five days later, we were seen bang on time at Bournemouth Eye Hospital. After a thorough sight test, which Little I passed with flying colours, she was given some drops to dilate the pupils so that a consultant could properly examine the backs of her eyes. She usually copes very well with medical examinations (in fact she loves them!), but the eye drops stung and took a bit of bravery on both our parts. Luckily I had a pink lollipop on standby in my handbag which I knew would see us through. After 30 minutes her pupils were as huge as saucers, and we were shown through for the final exam. We saw a top children’s eye specialist who was brilliant with Little I and carried out a very thorough test. Thankfully, we were told her eyes were healthy and there was absolutely nothing to worry about. I knew in my heart this was most likely the case, but it was lovely to have any doubts removed.

What we’ve learned is that in cases like this, it’s always best to be on the safe side and get these things checked out. I was so impressed with how seriously our concerns were taken, and how quickly we were fast-tracked through the system. It was explained to us that in most retinoblastoma cases, a serious problem will show itself when the child is looking directly at the camera, so that each eye is reflected equally in the flash. It’s also important that the photo has been taken in artificial light or a darkish room. If there’s a slight angle in the shot, it can produce the sort of results that we saw, particularly with camera phones. But we were told that if we had any concerns in the future, even in a year’s time, we shouldn’t hesitate to be asked to be referred again.

If you find yourself needing a useful resource on the subject, the Childhood Eye Cancer Trust website is very good. But it makes for difficult reading, so I don’t suggest you click through unless you really need to.