Warning: "continue" targeting switch is equivalent to "break". Did you mean to use "continue 2"? in /homepages/45/d285268989/htdocs/mummymcauliffe.com/wp-content/plugins/gravityforms/common.php on line 4815
 Our first yoga class | mummymcauliffe
Previous Post 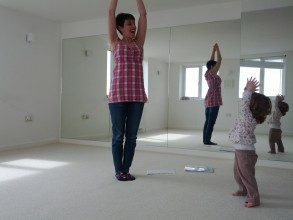 Where do toddlers get their energy from? Sometimes I am amazed at Little I’s ability to keep going (and she’s definitely not the most active in her bunch). From the moment she wakes up she is a busy bee. She never stops chatting, to herself or others, and keeping still for more than a few seconds is an achievement.

Her brain is similarly always ticking away. It never stops. She gets that from me, I think. I’ve never learned the knack of ‘switching-off’.

So today’s activity was a test of all of Little I’s boundaries, and some of mine too!

Today we went to our first yoga class together. I’ve shared previously that Little I attends regular ballet classes, so she is used to a class structure and the discipline of following a teacher’s instructions. But yoga calls on very different areas of discipline, both mental and physical. Essentially, it requires focus, concentration and a calm state of mind. Not the sort of traits that you’d typically associate with a two-year-old!

To be fair to Little I, she has an amazing concentration span for her age – she’s been known to sit at the table for more than an hour painting or drawing, or making things from playdough. But today’s yoga class tested her concentration in a very different sort of way, and one that I found very interesting to observe.

The intimate class lasted approximately 45 minutes. We began with some basic yoga exercises, stretching the body all over. We were shown the Downwards Dog Posture, arching up into the Cobra posture. I do a lot of exercise but nothing like yoga, which I know I should. I could really feel the benefit of stretching my body out in this way. Little I dived straight in, doing a pretty good job of copying the teacher and following the instructions. One of the things that I love most about my daughter is her enthusiasm for trying out new things – she is always up for giving anything a go.

After the stretches we entered a story section of the class where the instructor told a story of a mermaid via yoga movements. We were all encouraged to join in, and Mums particularly were invited to follow the class seriously and to keep going even when our child lost concentration (which happened a few times!).   Little I struggled a little with the Tree posture, which involves balancing on one leg with the other foot placed on the inside of the supporting leg, and the arms stretched upwards…so that’s definitely one for us to practice at home; but other movements she coped well with and repeatedly looked to me for affirmation that she was doing things correctly.

Within the next section of the class we did some gentle singing, again incorporating yoga movements. Some of the songs were new to the children, but the familiar tunes they sung with enthusiasm. They seemed grateful for the chance to release a bit of vocal energy, as to that point there had been a lot of listening and very little talking!

Finally we finished up with some relaxation. Little I had chosen to lie across the room from me favouring her new-found little friend over her Mummy, so I couldn’t physically reach out to hold her still. I tried to relax myself and keep my eyes shut, but all I could hear was my daughter fidgeting and shuffling around, and doing some very weird loud breathing. When I peeked at her she had her eyes tightly screwed shut, and it was evidently taking every ounce of willpower to keep herself from getting up and running around. I could empathise with her struggle though as I have never been able to manage the art of relaxation.

The class challenged Little I in ways that she’s never been challenged before. There was little formal discipline, but the expectations of how to behave came across in other more subtle ways. There were certainly several moments when one or more children ran off or lost concentration and would rather be playing with a yoga ball, but Little I evidently enjoyed her first introduction to yoga and came home wanting to practice straight away. She even drew this little picture of the three of us doing yoga together. 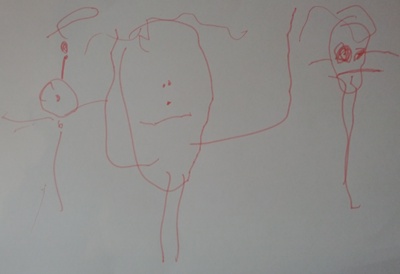 The class is run by a qualified instructor called Katy Wise who is great with young children. It takes place in a lovely purpose-build yoga and pilates studio, overlooking the sea. There are still a few spaces left on the six-week course, so for more information please visit the Free Spirit website. A new baby yoga class is also beginning next Wednesday. 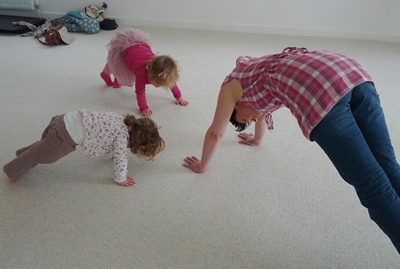