Warning: "continue" targeting switch is equivalent to "break". Did you mean to use "continue 2"? in /homepages/45/d285268989/htdocs/mummymcauliffe.com/wp-content/plugins/gravityforms/common.php on line 4815
 Is Baby Led Weaning for you? | mummymcauliffe
Previous Post 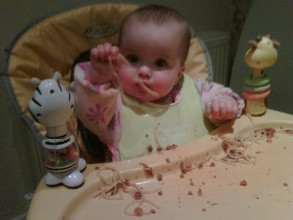 Is Baby Led Weaning for you?

Little I was weaned the Gill Rapley way. For the first six months I exclusively breastfed her, and when she hit six months I continued to breastfeed while gradually introducing solid food via the Baby Led Weaning approach (the term was originally coined by Gill Rapley, a former health visitor and midwife). I never made purées or separate meals – bar a few exceptions, Little I has always eaten the same as us.

Many of my friends have recently had second babies, and some have begun to quiz me about BLW. While they decided against this weaning approach for their first child, they are seriously considering it for their second, mainly because they feel it would be a much easier option…which it is! So I thought it might be worth sharing my experiences of BLW with you…

Why did I choose BLW? Well fundamentally, I was won over by the fact that it is a natural extension of breastfeeding. If you are breastfeeding on demand, your baby has been feeding at their own pace and already possesses the ability to control the amount of food that they are taking in. Similarly with BLW, you are effectively placing your baby in control of what they eat and how much. I also loved the independence that BLW encourages, along with fine motor skills and coordination. By six months, most babies will begin to reach for food and are physically able to feed themselves (all good reasons for waiting until six months to wean).

Additionally BLW allows food to be an extremely sensory experience for your baby. It enables them to discover individual tastes and smells, and decide for themselves what they like and what they don’t like. To illustrate my point, compare a  purée of pear and apple, with a platter of similar fruit slices. What’s going to be the most fun for your baby? The first will be spoon fed, and as delicious as it may be, the taste will be the combined flavour of the stewed fruits, and the texture will be soft and mushy. The latter option will offer different colours, smells, textures, flavours, which the baby can discover and experience for themselves.

My Health Visitor was happy to admit that she had very little knowledge or experience to share on the subject of BLW, and keenly followed mine and Little I’s progress so that she could report back to her colleagues! I remember her being astonished when I told her that Little I would happily munch on a broccoli spear, or eat spaghetti bolognaise with her hands.

If you are thinking about BLW, I highly recommend that you make the time to eat properly at the table as a family, for all mealtimes. One crucial aspect of BLW is that your baby needs to observe what you are doing, and learn to imitate. The social aspect of a meal time also plays a really big role, as it’s important that your baby views these times as something enjoyable. Be prepared for mealtimes to last quite some time when you begin with BLW – it wasn’t uncommon for our lunches to take an hour, but it was special time that Little I and myself thoroughly enjoyed.

Patience is really key. To begin with, don’t expect much food to be eaten. The majority will be mushed-up and end up on the floor. If you have cats or dogs they will definitely put on a few pounds during this time! I remember being so excited when I found the first piece of banana in Little I’s nappy (which weirdly looked like black threads)! That’s the easiest way to tell how much is actually being consumed. Some babies will grasp the art of eating a lot quicker than others.

Make sure your baby is sitting upright, and never leave them unattended with food. While we never experienced a choking incident, and there’s no reason why you should (assuming your baby has been breastfed); for peace of mind it is worth familiarising yourself with the correct first aid procedure for a six-month baby. While many parents worry that BLW could cause a choking incident, there is good reason to believe that babies are at less risk of choking if they are in control of what goes into their mouth than if they are spoon fed.

If your family has a history of food intolerances, it’s probably worth introducing foods gradually, but I have to say we didn’t do that. I was keen to make it really interesting for Little I and so I always tried to provide her with a choice of different foods on her highchair tray. I was merely careful to only use fresh ingredients in my cooking, with no added salt or preservatives.

Did I meet with resistance from friends and family? Yes! Lots of it. I’m sure some people thought I was mad for not serving up purees to my baby, while others watched with bemusement. While the criticism annoyed me at times, it never made me doubt what I was doing as I so firmly bought into the reasoning behind BLW and so did my husband.

Am I pleased I did it? Absolutely. In practical terms it was so much simpler not having to make separate purees for Little I, particularly since I returned to work part time when she was eight months old. I also loved the fact that she was an independent eater from a very young age, making it much easier to eat out and also more relaxing at home. Today, at the age of three, she is a great eater and will try anything. There are very few things that she won’t touch. A lot of this I credit to the philosophy behind BLW.

Are there any drawbacks to BLW? Well it’s very messy, so try to either eat outside or where the floors are washable as much as possible. A fair amount of food also gets wasted in the early stages, so it can be a bit demoralising if you’ve gone to the trouble of making homemade fishcakes. But I’m sure a lot of food gets wasted during the early stages of weaning, whichever approach you take. The fear of choking really worried a couple of my friends, for understandable reasons, and one did experience a proper choking incident. Finally, it can easily become the case with BLW that the child is eating lots of fruit, veg and carbs, but not enough protein. So it’s important to think through how much protein you are offering. I found strips of meat to work really well, and to this day Little I will gnaw on a chicken leg or pork rib until the bones are bare. Finally, although it’s normal to experience fluctuations in your baby’s interest in food if you are BLW, it is very easy to worry if you hit a patch when they just don’t seem to want to eat much. We went through a stage like this and I really panicked, but in the grand scheme of things it was only a short phase and no harm was done.

If you are interested in learning more about BLW, I highly suggest you read the Gill Rapley book. It offers a lot of detail on the thinking behind BLW, and I have only offered a snapshot here. The latest guidelines on BLW are also available on the Gill Rapley website.

If you have any personal experiences of BLW weaning, good or bad, please share below. If you are considering BLW for your baby but still have uncertainties, I’d also love to hear your concerns.