Warning: "continue" targeting switch is equivalent to "break". Did you mean to use "continue 2"? in /homepages/45/d285268989/htdocs/mummymcauliffe.com/wp-content/plugins/gravityforms/common.php on line 4815
 Getting back into fitness after pregnancy | mummymcauliffe
Previous Post 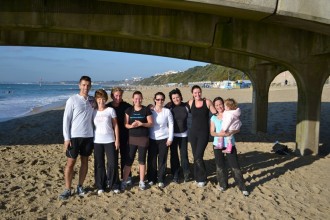 Getting back into fitness after pregnancy

From the title of this post you might think I had recently given birth, but the reality is that it’s taken me more than two years to get back into a proper fitness regime after having my daughter.

Before becoming a mummy, I was a gym fanatic and felt cheated if I hadn’t made it to the gym five times in one week. That seems like a lifetime ago now. My passion point and possible addiction was spinning, which is a crazy, adrenalin-filled 45 minute workout to very loud music in a darkened, sweaty room with disco lights. One spinning class is said to burn the equivalent of two Mars bars, so you can see why I loved it so much!

The main difficulty that I had with getting back into exercise after having Little I was that I breastfed for 15 months – something that I’m very proud of, but it didn’t help me get back my muscle tone! This meant that my ligaments were still too soft for anything high-impact, which is exactly the sort of exercise that I enjoy. Once I stopped breastfeeding I joined a few circuits classes at my local leisure centre, and last Christmas decided to take out gym membership thinking that would be the incentive that I needed to attend regular classes.

But the reality was that I was still rarely making it to the gym, and I certainly wasn’t getting my money’s worth from my membership. Truthfully I was struggling to find the time, but I was also starting to get complacent about my post-pregnancy wobbly bits and was getting very good at making excuses for not exercising. As a last resort I sought out a personal trainer for a couple of sessions – she came to my house and the workouts were booked around my family and work commitments, but at £30 a pop it wasn’t an option that I could sustain. However what these sessions did make me realise was that I was sick of going to the gym – after 10 years of it, I was really ready for a change in my exercise programme.

Just as I was at this point of realisation, a Groupon offer popped up for 12 boot camp fitness sessions on the beach, just five minutes drive from my home. The price was so good that it would have been rude not to go for it. The small print within the deal suggested that individuals should attend three boot camp sessions a week and I remember thinking that if I could make one to two a week I would be happy and would have got my money’s worth.

With a small amount of trepidation, I turned up to my first boot camp session with Jango on a freezing October evening. I’d attended other boot camp classes in the past which had been incredibly hardcore and so I was fully expecting the worst, and more. What struck me first of all was the friendliness of everyone – it had been a long time since I’d encountered such welcoming people in an exercise environment. I learnt very quickly that a lot of people had been attending Jango’s boot camp for several months, at least three times a week, and in some cases were even following a special healthy eating programme.

The boot camp sessions are 45 minutes long, and so far not one has been the same. Jango is incredibly creative about how he uses the seafront space – he has us running under the pier, doing burpees on the sand, sprinting up slopes, exercising in pairs, working with hand weights…the list goes on. In reality it is a group personal training session, out in the fresh air, on a beautiful stretch of beach, sometimes under a moonlit sky. In my book that beats a sweaty gym any day.

The downside is that we are at the mercy of the elements, but I’ve only missed one session in a month due to torrential rain and that was my choosing – the session still went ahead and people turned up!

I’ve made three sessions a week very easily and have never once needed to push myself to go. But it hasn’t just been about exercise. I’ve picked up an awful lot of advice from Jango on nutrition and have started eating a lot more healthily, with the rest of the family benefitting too. I think it’s fair to say that I have managed to recover my enthusiasm for exercise.

The only drawback is the full cost of membership – it’s a big amount to swallow, but I’m told there will be tiered pricing launched next year with cheaper options available.

So if you’ve had a baby, either recently or as in my case, a couple of years ago…don’t give up if you haven’t yet been able to make time for fitness. Keep looking until you find something that you are going to enjoy enough to stick at it! In my case I’ve found it’s really worked to find something new and social.

As a follow-up to this post, I’ll be publishing some top tips from Jango on how to get back in shape after pregnancy.