Warning: "continue" targeting switch is equivalent to "break". Did you mean to use "continue 2"? in /homepages/45/d285268989/htdocs/mummymcauliffe.com/wp-content/plugins/gravityforms/common.php on line 4815
 Christmas activities with a toddler #fail | mummymcauliffe
Previous Post 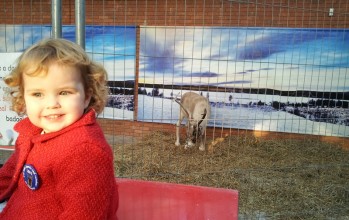 Christmas activities with a toddler #fail

Sometimes, life with a toddler just doesn’t go to plan.

From time to time, I really need to remind myself that my daughter is only 2.5 years, and that she doesn’t yet grasp the concept of ‘making an effort’ when special activities have been planned for her.

Over the past week we have had two unsuccessful Christmas outings.

The first, a trip to see Father Christmas, came as no surprise. In the run-up to the Christmas period I had been quizzing Little I about whether she wanted to go to see Father Christmas. Each time I had been met with a firm, unequivocal response of “no Mummy, he’s scary”. I think part of this fear stemmed from a recent birthday party that we had been to where there had been a life-size Peppa Pig, which had left Little I so scared that she was literally shaking. So I decided not to push the matter.

So when we were at the local garden centre with my Mum the other day, which each year has a lovely winter wonderland with real reindeer… I was a little taken aback when Little I piped up that she had changed her mind about wanting to see Father Christmas. Seizing the opportunity, we spoke to a lovely Elf on the door who said it would be fine for us to tentatively enter the grotto and only pay at the end if it was a successful mission.

Luckily it was very quiet and there was only one other family ahead of us, so we took our time walking slowly through the snowy village scene, with Little I visibly losing her nerve the further she went. When we were half-way to the grotto door, a very convincing Father Christmas peered out through the window and waved to us (he had been forewarned!). Little I froze, and quickly inched her way back towards me, grabbing hold of my leg. My Mum and I tried to gently coax her forwards, but she wasn’t having any of it. I’ve mentioned before that Little I sometimes talks with a stammer, and I’ve noticed that when she’s scared she really struggles to get a word out. She clung onto me in silence and it was clear that we weren’t going to be seeing Father Christmas that day…or this year!

The second aborted Christmas treat was to the cinema to see a festive movie. At home, Little I will happily sit through an entire animation, so we thought that she might be ready for her first outing to the cinema. She’s a fan of Shrek and so we thought she might like the new Puss in Boots film, but we screwed up on times and turned up for the 3D showing instead of the 2D. Ahead of me in the queue I overheard a Dad buying tickets for the Odeon Kids club, and so being new to this game I enquired what it was about. There was a showing of The Smurfs in 20 minutes, and even better was the price – £2.50 per child with one adult going free, and only £2.50 for an additional adult. That worked out about half the price of going to see a regular movie as a family, and thankfully Little I seemed excited to see The Smurfs.

Our buggy was taken from us at the point of our tickets being checked, and locked away safely. The cinema was really empty and we were early so had plenty of time to choose our seats, which is something that I’d definitely recommend if you’re a first-timer. The problem that we found was that if sitting in her own seat, Little I couldn’t see any of the screen. If she sat on my lap she could probably see half of the screen. To enable her to see everything, I had to make a cushion from my coat and place it on the arm rests between me and my husband, and then perch Little I on that. As the cinema was quiet we could get away with doing this. Thinking about it afterwards, I’d really recommend bringing a booster seat or cushion with you – I don’t know why the Odeon hasn’t thought about providing something like this.

The other issue that we had with Odeon Kids is that they seem to show the full length adverts and trailers that you have in a regular film showing. This really surprised me, as I was expecting them to chop all of that our for little ‘uns. So after 20 minutes of ads, Little I was getting very fidgety and a bit miffed about why the film hadn’t started yet. “Where are my little Smurfies?” she kept asking.

So inevitably, after 30 minutes of actual film, and two visits to the toilet (one of which included an exploding tap incident, which resulted in Little I re-entering the cinema in just a vest!), Little I had had enough. So we sheepishly made our exit, much to my husband’s annoyance. “I was quite enjoying that”, he said afterwards!

So the moral of this story…go with the flow with a little one at Christmas, and in my case, don’t expect them to fully embrace all of the ‘firsts’ that you, as a parent, can’t wait to do with them!