Warning: "continue" targeting switch is equivalent to "break". Did you mean to use "continue 2"? in /homepages/45/d285268989/htdocs/mummymcauliffe.com/wp-content/plugins/gravityforms/common.php on line 4815
 A weaning update | mummymcauliffe
Previous Post

When it comes to weaning your baby onto solid food, there is a lot of conflicting advice out there, and particularly if you are breastfeeding. While there’s general consensus that ‘breast is best’, I’ve also been told on countless occasions that from six months and beyond (and some say earlier), breast milk doesn’t contain the nutrients, and specifically iron stores, that a growing baby needs. Whatever school of thought you buy into, I personally feel this has created a bit of an obsession within this country to wean babies onto solid foods by the time they are six months old.

Well my son Wolfy wasn’t having any of that! We began trying to wean him at six months (to that point he had been exclusively breastfed), but as I’ve documented in a previous post, he genuinely wasn’t interested in real food. The facial expressions he would pull when I served him up a lovingly prepared plate of food would make you think I was trying to poison him. We perserved for months, and although there was slight progress, by his first birthday he was still pretty much surviving on breast milk. It was a huge worry and mealtimes became a time of dread and anxiety for me. Even his homemade football birthday cake was lobbed across the floor! 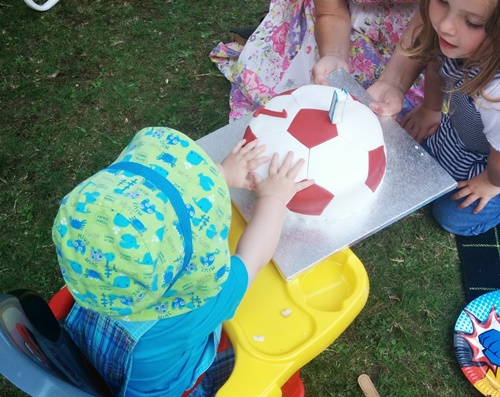 Then suddenly, around the age of 15 months, Wolfy suddenly developed an appetite for food. It’s hard to pinpoint when exactly this happened or why, but it was around the same time that he began walking and also cut eight teeth in one week. Now there’s no stopping him. At dinner time he is usually the first person to demolish his plate of food, before he begins begging me for some of mine. He will happily power his way through three courses, and then still be asking for more! He is finally living up to his pregnancy nickname of Wolfy.

I have very little advice to impart, other than to reassure mums in similar situations that your baby will get there in the end. Every baby progresses at different rates, and the Government’s six-month guideline for weaning your little one is simply not going to be applicable to every child. I refuse to believe that breast milk can’t sustain a baby for as long as they personally require, as in my case, it undoubtedly did!

If you need something to lift the mood at challenging mealtimes, check out the vibrantly coloured feeding range by Boon. We have been expanding our collection over the past year, and are big fans of these products.  Not only is Boon eye-catching and appealing to a young child, but the clever design is unrivalled by anything else I have seen on the market. We particularly love the Boon Benders; flexible cutlery which can be positioned to accommodate any grip in any direction. We’ve tried and tested them on many occasion, and I can honestly say that they even work with yoghurt! The Catch Plate is another favourite, which suctions to the table and has a flexible spill catcher which really does the job of catching food before the cats get it! 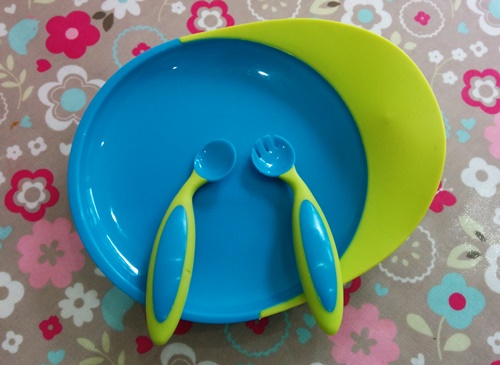 Do you have any weaning advice or stories to share, or any favourite products or toddler recipes? If so, I’d love to hear below…

Disclaimer: For the purpose of this review I was very kindly sent some Boon products to review. All opinions stated here are of course my own.