Warning: "continue" targeting switch is equivalent to "break". Did you mean to use "continue 2"? in /homepages/45/d285268989/htdocs/mummymcauliffe.com/wp-content/plugins/gravityforms/common.php on line 4815
 A wonderfully cheap family holiday at Devon Cliffs | mummymcauliffe
Previous Post 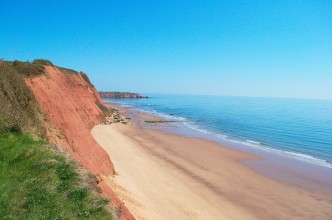 Published by Wendy McAuliffe In Days Out 3 Comments

Why on earth haven’t we done a £9.50 holiday with The Sun before? It really is worth saving up those 10 tokens for as it is a great way to holiday on a budget, particularly when your children are young.

We have just returned from a fun-packed four-night break in Devon, staying at Haven’s 5 star holiday park, Devon Cliffs. It’s located in Sandy Bay, Exmouth, which is a truly stunning part of the Jurassic Coast. Nestled below it is a sheltered, award-winning sandy beach, which can be accessed directly via a coastal path from the holiday park.

We were allocated a three-bedroom caravan a few metres from the cliff-top edge with spectacular sea views. I have never stayed in a caravan before, despite doing lots of camping as a teenager, and so had a few reservations. But hand-on-heart, I was thrilled with the well-kept, spacious, modern and clean caravan that we entered. Little I, of course, was ecstatic. What child wouldn’t be excited to stay in what is, quite frankly, and over-sized Wendy House!

The holiday cost us a total of £98, excluding petrol and food and drinks while we were there. So a little more than £9.50 per head once we had upgraded to a more luxury caravan, paid the power charge of £30 and opted to have our beds made on arrival, but still a bargain. Even our entertainment passes for the week were thrown in for free.

What we couldn’t put a price on though was the weather. We were incredibly lucky. Who would have thought that the last week in March would turn out to be such a scorcher!

Devon Cliffs is Haven’s flagship holiday park, so I’m told, and it is a really well-oiled machine. The grounds are very well kept – we saw a team of gardeners at work the whole time we were there. If you have never stayed at a Haven holiday park before, be prepared for the scale of it. It is huge, with its own street names and road map. We were staying in Cypress Way which fortunately occupied a lovely cliff-top location. Check-in was quick and easy with no queuing, even though many families were checking in at the same time as us. The staff couldn’t have been more welcoming.

Within the centre of Devon Cliffs is the entertainment complex, which houses the sports and leisure facilities. Our free entertainment pass entitled us to unlimited access to the indoor swimming pool among other things(the outdoor pool didn’t seem to be open yet), which was a really lovely pool for youngsters, complete with a water play area and several slides. The changing rooms and pool area were immaculate – there were a team of staff washing the floors around the clock. What I also found impressive were the vigilant lifeguards on duty at all times, particularly in the water play area where most of the younger children were playing. One personal highlight of the week for me was Little I learning to swim unaided with arm bands. I think that’s testimony to the perfectly designed pool, as she was able to build up her confidence in shallow water where she was within her depth, until she felt ready to venture out into slightly deeper water. Once she was going there was no stopping her!

The coastal scenery in Exmouth is breathtaking and from the park there’s a spectacular cliff-top walk to Exmouth beach, which is actually the western gateway to the Jurassic Coast World Heritage Site. We found the rugged path a small challenge with a buggy, but easily do-able, particularly since Little I was happy enough to walk most of the way there and half of the way back. It took us about 40 minutes each way, but that was as a leisurely stroll with my husband stopping every few yards to take photos. At the half-way point in the walk there is a five-metre high ‘Geoneedle’, which showcases the various rock formations of the Jurassic Coast, and a ‘rock’ hopscotch which Little I was very excited by. 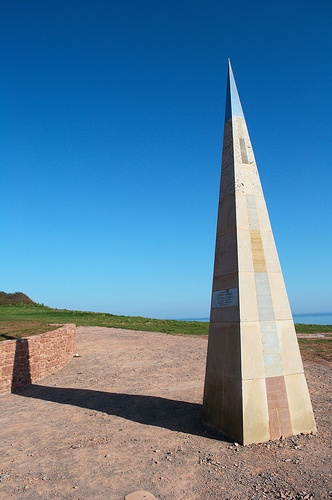 Staying with an almost three-year-old in a caravan is a lot of fun, and during the first couple of days we struggled to prise Little I away from it. The novelty value of being able to reach and open windows, and flick light switches, never wore off for her. She turned into a little housewife, rushing to lay out breakfast for us in the morning. I’d recommend you take a small heater with you and a hot water bottle though, as the nights are still cold at this time of year. Our bedrooms were unheated and on the first night Little I ended up in bed with us as she woke up very cold.

The single complaint that we had about our holiday was the coastal path from the park to the beach being shut due to building works – a new cliff-top cafe is under construction, and I presume they hadn’t anticipated a heat-wave in March. The situation is understandable, but we were disappointed by the lack of communication by Haven, and we had to do a bit of digging ourselves to understand the situation. It turned out to be no big issue though, as Exmouth beach itself is lovely with stunning cliff formations, sandy dunes and rock pools.

If Little I were writing this post, she would also want me to mention the Zoo Troupe. This is Haven’s show for kids which runs every evening at 6:30pm, and although it sounds cheesy, the standard I felt was really high and it kept Little I transfixed. If you can imagine a cross between ZingZillas, the Tweenies and Dora the Explorer, live on stage, you won’t be far off the mark. Little I also discovered the wonder of 2p slot machines during our stay, and hasn’t stopped talking about them since.

We’ll definitely be collecting our tokens in The Sun again next year. Set aside any reservations that you might have about such a cheap holiday, as it truly is a bargain not to be sniffed at! It has also sold me on the idea of staying in the UK for our next family holiday, particularly to explore more of the Jurassic Coast.

If you have experiences from a holiday with The Sun to share, please use the comments box below.