Warning: "continue" targeting switch is equivalent to "break". Did you mean to use "continue 2"? in /homepages/45/d285268989/htdocs/mummymcauliffe.com/wp-content/plugins/gravityforms/common.php on line 4815
 Jack Draws Anything | mummymcauliffe
Previous Post 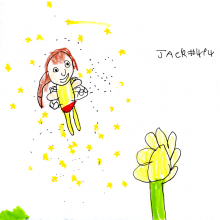 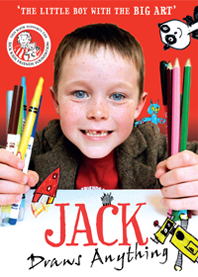 Last night I spent a couple of hours engrossed in the newly launched book ‘Jack Draws Anything’, kindly offered to me by Hodder Children’s Books for review. I couldn’t put it down until it was finished. I can truly say that the heart-warming account of six year-old Jack Henderson and his astonishing fundraising efforts for The Sick Kids Friends Foundation has given me a much needed sense of perspective.

The book, authored by Jack’s Mum and Dad, tells the inspiring story of one six year-old boy living in East Lothian, Scotland, who decided off his own back to draw pictures in exchange for donations to the Royal Hospital for Sick Children in Edinburgh. His youngest brother, Noah, suffers from bronchiolitis and has been treated at the hospital on countless occasions, so it was a cause close to Jack’s heart.

Jack’s initial fundraising target was £100, which his Mum and Dad thought was a realistic amount for a six-year-old to raise. Astonishingly, he raised this amount within four hours of the Jack Draws Anything website going live. Within a day Jack had reached his new target of £500 and within two days he had reached £1,000. To date he has raised over £26,000 and the figure continues to grow.

The book, told through the eyes of Jack’s parents, brilliantly captures the drive and determination of their son. With over 500 drawings to complete, his commitment to the cause, matched with his love of drawing, is truly inspiring. I’m sure it will put many of us to shame. Yet the humility of Jack’s parents is sobering – not at one single point in the book to do they boast about the achievements of their son – instead they stay true to telling the story in the way that Jack would want it to be told.

Jack’s Dad joked with me on Twitter, prior to me writing this review, that he and his wife have a C for English between them, but he needn’t have worried. I found the book to be a genuinely moving and compelling read (I won’t mention the couple of typos that I spotted!), filled with lovely touches of humour. I particularly liked the account of when Jack and his family were asked to appear on the Fern Britton show: ”As the family were introduced, Toby sat and picked his nose and handed the bogey to Mum, while Noah attempted to escape and poor Jack got huge stage fright.”

However it goes without saying that Jack’s wonderful drawings are the star of the show. He is a very talented little lad and the progress in his drawing ability throughout the book is also very evident. His drawings are full of imagination, energy and detail. I particularly loved #128 ‘Royal Wedding’ which shows a rather well-endowed Kate Middleton and Prince William getting married. Additionally, #174 ‘Captain Jack Sparrow’, and #227 ‘Mr Bean’ capture brilliant likenesses of the characters’ faces.

I can easily see this becoming a book that I flick through regularly, particularly when I feel the need to be ‘grounded’. My two year-old daughter also loved looking through Jack’s pictures with me, and when she’s a little older I will let her make her mark on the ‘Doodle Pages’.

The book is available to buy at all the usual places, and a full list of stockists is available on the Jack Draws Anything website. It is retailing at £6.99.

Jack is no longer taking drawing commissions as he needs to get back to being a little boy, but you can still donate via Just Giving and a variety of other methods.